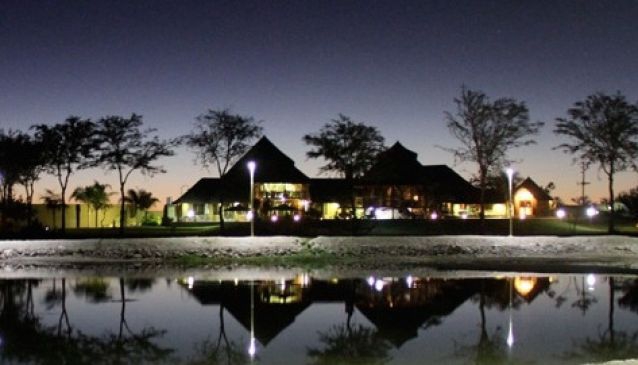 Lapa Lange Game Lodge is built arond a waterhole and is set in semi desert savannah area in southern Namibia.

Accommodation at the lodge consists of five well appointed luxury chalets which are set around the waterhole. There are four Superior Chalets which can accommodate four people each and have two bedrooms, the main bedrooms is en-suite; there are two bathrooms; air-conditioning; lounge/tv room; patio and a private barbeque area. The Honeymoon suite is larger than the superior suites and can accommodate two people, it has one en-suite bedroom; two bathrooms; air-conditioning; lounge/tv room; patio; private barbeque area and a jacuzzi. There are also ten standard suites which either have a double bed or two single beds; a bathroom with a shower; ceiling fan; fridge and a patio area. The four luxury suites at the lodge are slightly larger than the standard suites and have either a double bed or two singles; a bathroom with a shower; air-conditioning; tv; fridge; patio area and in-room safe. The four superior suites have similar features as the luxury suites as well as a bathroom with a corner bath or jacuzzi.

The lodge has a camping option in the form of six campsites set on a level grassed area with water & power supply; full ablution facilities and there are also two-sleeper and four-sleeper tents available.

The lodge also has conference facilities in the form of the Rhino Hall; 360 Degree View Room and the Elephant Hall, each with different capacities.