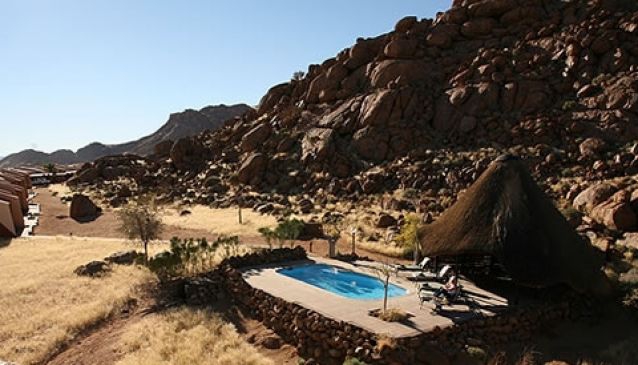 The vast wilderness of almost 50 000 square km contains key features such as Sossusvlei, Sesriem, the Welwitschia Trail, Sandwich Harbour, the Naukluft Mountains and the Kuiseb Canyon. This vast tract of land covering an area the size of Germany, consists of dunes (some of which at Sossusvlei are amongst the highest in the world), gravel plains and rugged mountainous areas.

It is one of the least populated areas in the country where the visitor can experience an intense feeling of vastness and isolation. Here the magical and awe-inspiring beauty of the night skies can be enjoyed like few places on earth.

Sossusvlei, with its monumental dunes, up to 325 m when measured from the base, is one of the top destinations in Namibia. The star-shaped dunes are a sought after topic for artists and photographers. Formed by strong multi-directional winds, they are at their highest and most spectacular where the west-flowing Tsauchab River empties itself into the vlei. The warm tints of the sand, ranging from apricot to orange, red and maroon, contrast vividly with the dazzling white surfaces of the large deflationary clay pans at their bases. One of these, referred to as Dead Pan, is a large ghostly expanse of dried white clay, punctuated by skeletons of ancient camel-thorn trees, carbon-dated as being between 500 and 600 years old. When it has rained sufficiently in the interior for the Tsauchab River to come down and fill the main pan, flamingoes and other aquatic birds are drawn to the area.

The Naukluft section completes the other half of the Namib - Naukluft National Park. Encompassing the Naukluft mountains and boasting massive and varied rock formations, Naukluft is a geologist's paradise. The intermittent layers of horizontally folded igneous rock, quartzite, dolomite and shale are impressive with their giant symmetrical patterns. Five different vegetation communities within the park ensure a wealth of tree and shrub species, and a variety of aloes.